This shoot was as fun as it was challenging, maybe more fun :)

Elliott had commissioned me to take some pictures of his, awesome and somewhat edgy balloons for use on Amazon etc.

After the initial brief, just product shots, he'd had the brainwave to include human interest in the shots by way of a model, enter the incredible Sophie!!

I'd met Sophie a month or so before on another shoot and knew she'd be ideal for this casting.

Elliott had decided he not only wanted to be on site to capture some clips of the shoot, but, that the site be his home, so I packed up the car with all sorts of gear and head off to meet my client and our model.

Elliott primed us both with coffee as I set up the studio space and off we went, as I thought Sophie was great and really helped capture the essence of the balloons and the tell the story Elliott wanted told.

We took some time after to shoot the balloons alone for future use and composite work. I took care of all the editing too.

This shoot was challenging due to the setup circumstances and limited space and I think we worked through it to produce some great shots. Elloitt took lots of behind the scenes stuff to and put together a short video to share with his customers.

It's definitely not all glitz and glamour ;) 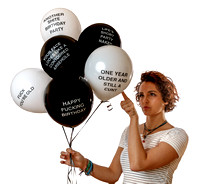